For your daily dosage of rants, discussions and pretty much everything you may want.
Have fun, discuss the size of your girlfriends boobs, and some pics are welcome too!
36 posts

some might know me (musclecarfreak / mcf) back from the Carma 2 modding days.

Anyhow, after being a bit disappointed by Reincarnation/Max Damage and also Wreckfest (don't get me wrong, I enjoy those games, yet they didn't really turn out the way I wanted them to) I decided to make my own crash racing game, because eh, no big deal right?

Its main premise and overall look is very much inspired by the first Destruction Derby game, but it also takes a lot of gameplay elements from Carmageddon, Flatout 2, Demolition Racer, Test Drive: Eve of Destruction...

Basically, it is supposed to be a sort of "best of" of all 90s/00s arcade crash racers I ever played.

Well it's quite some work for a single person, but I'm coming along well and plan to release it this year.

I have the basic arcade mode (a.k.a. single race mode) implemented and ready as a closed alpha on steam.

I would be very grateful for some alpha testers to get feedback on gameplay, bugs and performance.

So if you're interested, just write in this topic and I PM you a steam key.

You can keep the game and get the final version when it comes out! 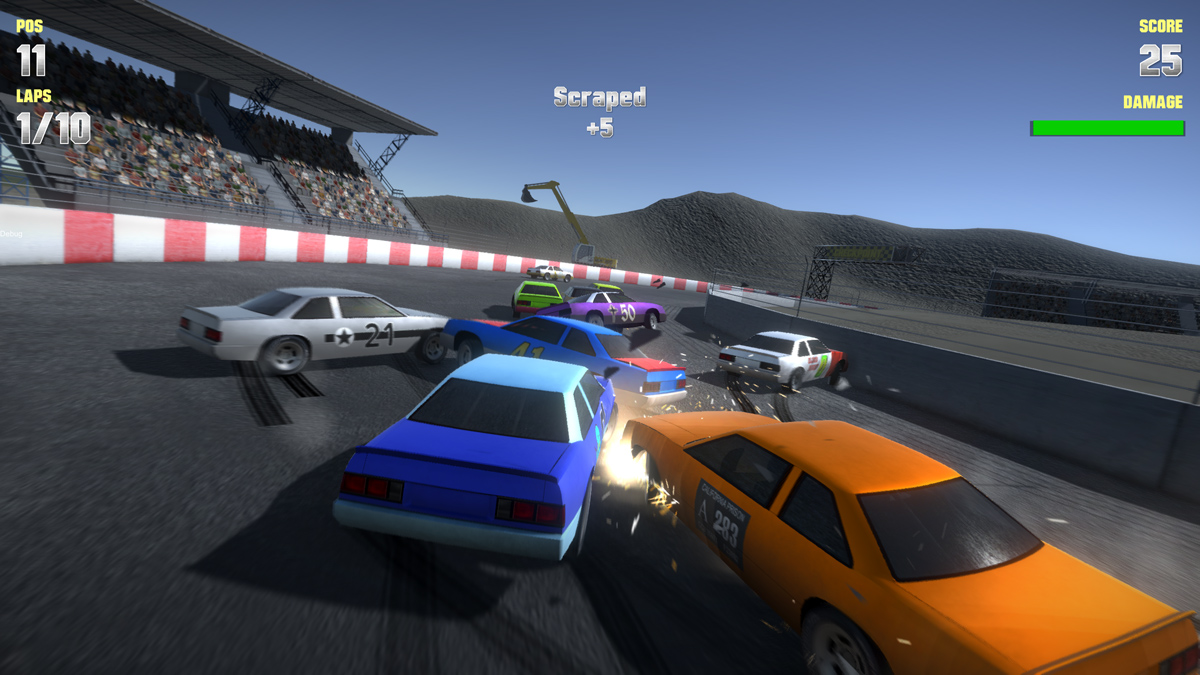 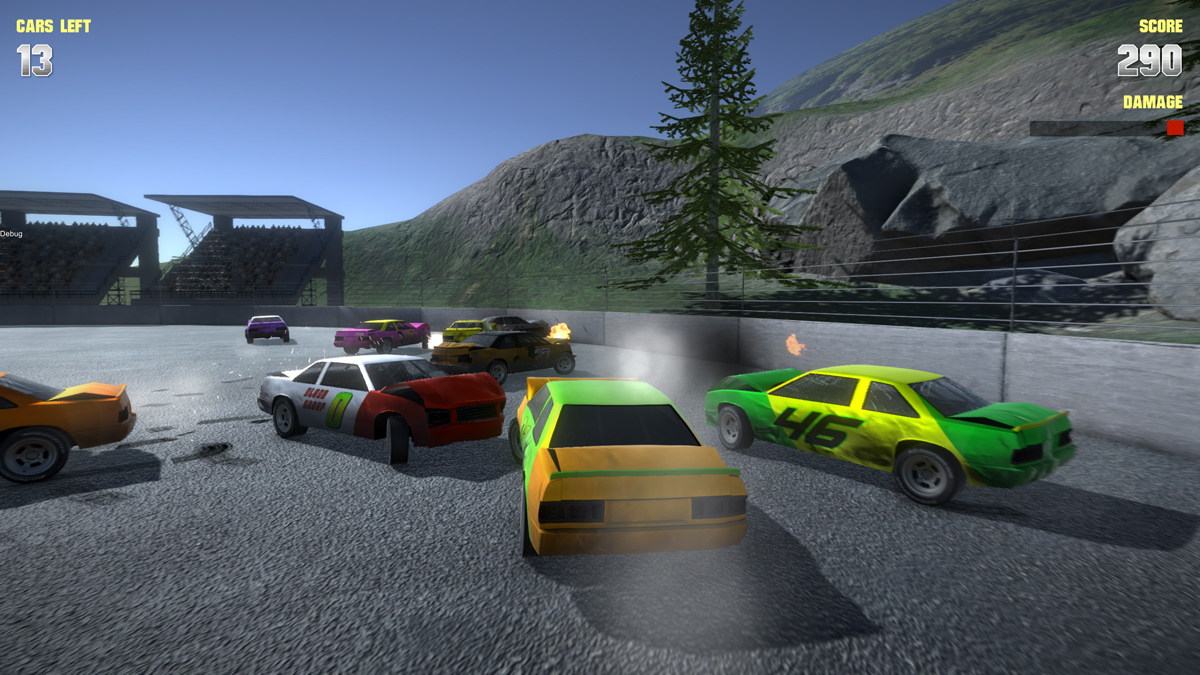 I'd be glad to hear from you!

Hey there, looks interesting, I can certainly do some tests and give feedback :)

Hey,, Redid my computer because of a MS update that completely F'ed up my OS i too am running a windows 7 64bit MSI 1050 TI card nice cheap and great at what the card can do.

Im not so much of the destruction durby games but i do like destructing tracks and cars when racing, Anyways Id be interested to give you feedback as well.

I might check in a week or so and we can find out what thoughts are with the game your making.

Hey, my PC is Windows 8.1, Geforce GTX 1060, AMD Ryzen 5, 16GB ram. Always interested in a derby racing game, i would love to try it out. Good luck with your project.
Top

Go on then, i'll give it a bash, looks interesting.

I'll provide feedback and the likes.

Thanks Fr0nt, yeah I really tried to capture the feel of DD1 and many racers of that area, so I avoided any post process overkill or over-polish and went for a colorful, simple (but hopefully not too simple) look.

Do you want a key too? No obligations, some quick feedback would be more than enough.
Top

This looks interesting, good luck with it!
Top

I'm one off the staff that organized Frogbyte Lan party (biggest italian lan party). Check us on Facebook.

I hope to see news soon.

I personaly love Carmageddon Max Damage! I want that it became bigger!

Have a nice day Carma Staff! And Carma Fans!

Hi luckbiturbo! Thanks for your interest.

To make it clear, I am in no way associated with the Carmagedden developers (Stainless), I'm "just" a big Carma fan who develops this little indie title on his own (with a little help here and there).

I'll gladly provide you with a key, check your inbox soon.

That Frogbyte Lan Party sounds very cool! LAN or Online Multiplayer is far down on the roadmap right now, maybe even after the release, it depends on how much interest/demand there is, because it will be a lot of work that would be in vain if there are only 3 people playing.

Never the less, if I dial in the scoring/balancing well and maybe a team vs. team mode, I think this game has potential as a MP or even eSport title (kind of like Rocket League).

I hope the best for this project. Off course is a good project. More "ignorant" is the game and more fun it will be XD.

I would gladly test that game out if my config is good enough:

Hey Excidium, I'm very interested in how the game runs on (somewhat) older hardware like yours, so that's perfect for testing. Please play around a bit with the settings in the graphics menu and tell me if you can get a smooth enough performance. There are also some tracks and parts of tracks that are more demanding than others.

Game looks good I'll be happy to test a bit.

MuscleCarFreak wrote:Thanks Fr0nt, yeah I really tried to capture the feel of DD1 and many racers of that area, so I avoided any post process overkill or over-polish and went for a colorful, simple (but hopefully not too simple) look.

Do you want a key too? No obligations, some quick feedback would be more than enough.

yes sure, i will check it out.

just dont make the damage system the same as DD1, it was hard to stay alive :D

and if you make race tracks, make sure you include a track like the one with the jump before the big drop in DD2, loved that part of the track. ;)
Top

Fr0nt wrote:
just dont make the damage system the same as DD1, it was hard to stay alive :D

Yeah I try to make it not as punishing as DD1 or DD2 or even Demolition Racer (I played through all of these as preparation for this game ;) a lot of reloading save games involved...)

In fact, I use the logic of Flatout 2 which is sort of unrealistic but cool from a gameplay point of view: When two cars crash, the faster one gets the score and no damage, the slower one gets the damage but no score.

That means if you keep a good pace and avoid being hit by faster cars, you can last quite long.

I will explain this system better in-game at some point, for now you just have to take my word for it ;) .

Fr0nt wrote:
and if you make race tracks, make sure you include a track like the one with the jump before the big drop in DD2, loved that part of the track. ;)

I also love the canyon track of DD2, however my game is very close to DD1 even in track design, so most of the tracks are simply flat, yet there are additional ramps to spice things up in the mid- and high-difficulty levels.

Key if you have any left.

Thanks though if not

Win 10 a ton of ram. Cant remember the specs cause I bought it all probably top of the line 2 years ago.
Top

Doesn't even remember his system specs... you're my kind of guy ^^.

Only few keys left (for now), I managed to squeeze one out for you, check your inbox.
Top

Dammit, I thought I already volunteered, but it seems I forgot.

If there is still keys, I would like to have one.

Would love to check this out!

This will be the last alpha key for now, I will probably provide some more at a later stage, so keep an eye on this thread if you're interested in joining.
Top

MuscleCarFreak wrote:Doesn't even remember his system specs... you're my kind of guy ^^.

Only few keys left (for now), I managed to squeeze one out for you, check your inbox.

Old age for one thing :) Thanks for the code. Future good wishes on your development of this game.
Top

I uploaded a small update today.

There are 3 changes that I am kind of curious about, would be cool if you could test them and give feedback:

1) I reworked the scoring system a little bit, now you get points for every position except last (not only top 5) and I ditched the bonuses for checkpoints. I hope this makes the racing and crashing part of scoring a bit more even, although it will always be a game that focuses more on crashes and rewards recklessness ;) .

2) I integrated the steam API and you should now see your avatar and user name in the result screen. Please tell me if anything looks odd (name too long for example)

3) I added some wet street effects to the city level. I hope they don't have that much of a performance impact - would be cool if you could verify this. 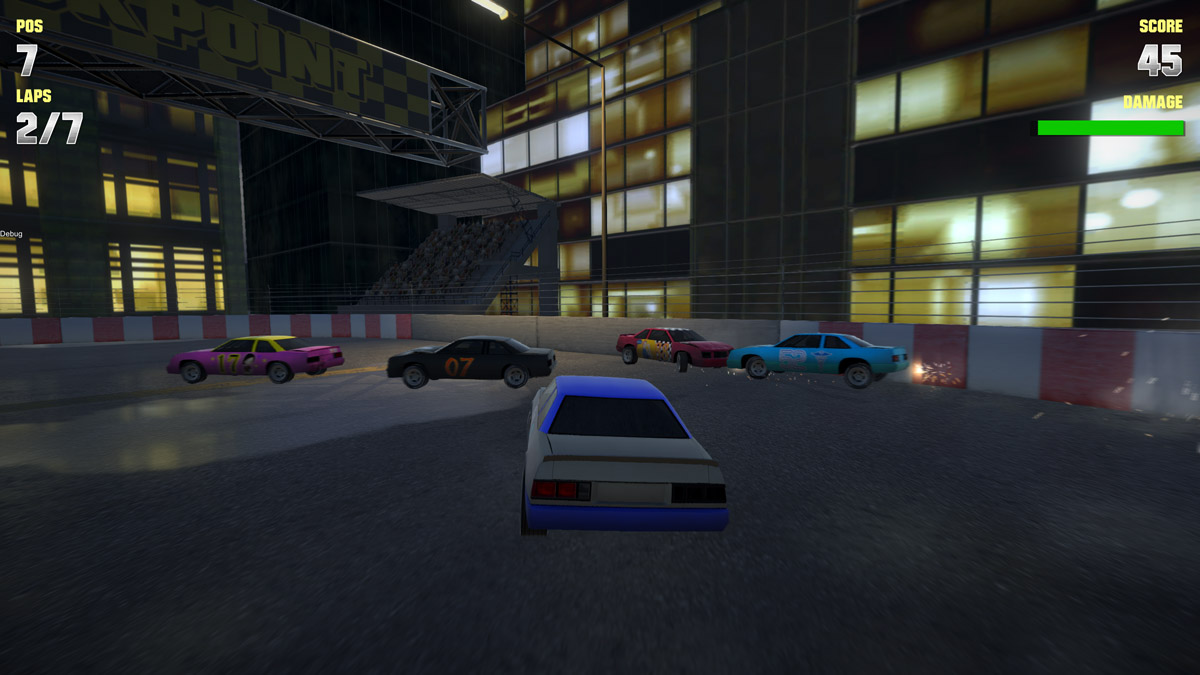 Is there still keys giveaway? Would like to test and give feedback...
Top

Can you please tell me your system specs?
Top

Hey twisted and robert_raw, sorry but I rather wait till the next alpha/beta phase, I marked your user names though and will make sure you get invited.

I think it will be some time late in July when I will have a bigger update with the campaign modus implemented and most of the gameplay features completed.
Top

Would love to be apart of this, assuming it is still on.

I am willing to wait, read your previous replies. Any inclusion would be awesome.

Hope to be apart of the fun.

Hey, if you will send any tester keys in the future, i'm down to check it out.