All things Carmageddon TDR2000 related - from editing, to multiplayer, tips and hints.
15 posts • Page 1 of 1 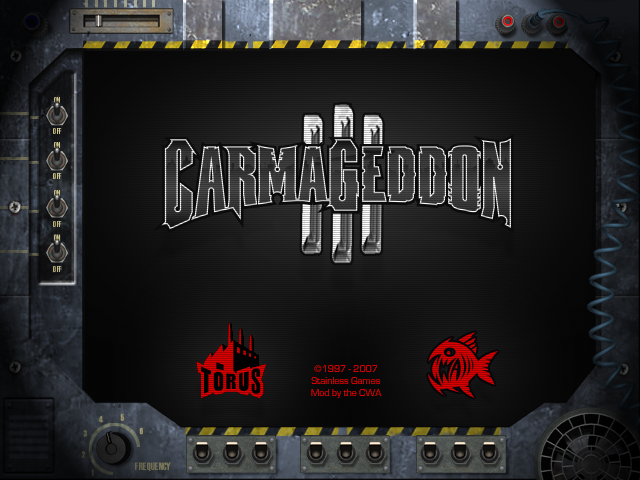 Sorry to bump the TDR subforum just for another talking head topic!
Just a discussion that might or might not turn into a mod, who knows?

We all know that while TDR2000 was a decent game, it wasn't a good Carmageddon game.
So I'm kinda wondering what would be the aspects (especially the smaller, easier to edit details) you'd change that would make an impact on the game and make it closer to an actual Carmageddon 3.

I'll start with a simple thing: I'd remove the very short timer limit. And then replicate C2's time/point awards.
Here are some points from AlexTSK, CzechDeath, Ratty, Razor:

Something about the overal physics of the game feels off, especially around the car collisions. The impacts could be better.
[can be achieved by stiffening the collision models (dcol) and tweaking the txt files]

As a general sentiment, a lot of vehicles feel uninteresting or out of place. The lack of a proper bio per car/driver is deplorable too.
[IMO changing bios and skins can make a huge difference. Some examples: the Tomahawk can easily become a new Stigosaur. TheChef could be driven by Kutter and skinned accordingly. Helomyname showed some interesting takes on the original cars but his Autoscum-themed Spectre shows us that it doesn't take much to get back into the Carmageddon universe and put some sense into the TDR models. In the same vein, the MagnaChem brand can be brought back (in the levels and on cars like the Garbage truck).]

The story takes too much place. The missions are too focused on the story. The levels feel too confined.
[I don't really see what we could do about the missions besides replacing the most annoying ones by races or simila simpler stuff. The whole story thing is easy to hide though, replacing the opening cutscenes and all references should be doable. IMO the confined levels feeling is due to the presence of the big walls, they could be turned invisible or into a small fence easily as well via a texturechange.]

Finally the name of the game might require a change. 'TDR2000' doesn't make much sense, and there's no pun or gimmick at all. Speaking of humour, I feel like it really lacks in this game and takes itself too seriously...


So now, what's your opinion? Do you know any other small edit that'd make a carmageddonish impact on the game?

[edit] interesting links:
The TDR Diary
What are the best points and worst points of TDR?

Yea the cars in TDR feel floaty, light and go over one another, rather then pushing one another.

back in the day when I used to fuck around with the settings, I was able to edit about anything except for the mass,
Top

Just willing to add: the lack of a proper Hawk MK4. However the very bland Sportscar or the McKillem could make for a nice Hawk once reskinned. And ofcourse both cars available from the get go.

The AI could be made more aggressive, as it is very racing-oriented.

You already know my thoughts on all of this and I'm down for helping out with it!

EDIT:
A lot of vehicles are shit and need to actually have some character
Bios need restoring and reworking to include characters from the Carmageddon universe (this is easy to do, I have posted instructions to do this in the past)
Levels are far too small
Levels feel claustrophobic due to the walls around them all, like they're all set pieces and aren't actually real environments
Each level feels like it belongs in a completely different game, as though each designer was working on a different themed racing game
Post-apoc stuff needs reworking as Carmageddon isn't post-apoc, it's just shit-future
Time limits and time bonuses need fixing
Missions need improving as they don't work, they're only difficult because of the game's problems and not because they're a legitimate challenge
Menu UI is horrid
Needs car pun in the name
[ Razor @ Carmageddon Webmasters Alliance Network ] [ My Downloads ] [ My Carma Items ] [ Conversion lists ]
To download the BETA Mod and more information on my other work, visit me @ https://razor.cwaboard.co.uk
Top

I totally support this idea, but...

As with C2 and CarEd, what is needed and available to create for TDR?

What ways are available to acquire this game? (Not sure if I have my download copy anymore.)

Is it worth it for the internet multiplayer? (Sure, the new one has it, but that games sounds pretty CPU/graphic intensive.)

Is there any other advantage to this engine over C2?

You can get the game from Steam or GOG.
The multiplayer is quite fun when you've a few folks playing and it's good for testing new mods out as well as it's a lot quicker just to go through multiplayer and launch a game than dick around with the singleplayer modes and shitty menu UI
The engine offers a number of improvements over C2, the physics are a lot more realistic. I'm sure Toshiba will expand on what I've stated a lot more.
[ Razor @ Carmageddon Webmasters Alliance Network ] [ My Downloads ] [ My Carma Items ] [ Conversion lists ]
To download the BETA Mod and more information on my other work, visit me @ https://razor.cwaboard.co.uk
Top

Yeah I agree with you there there Razor some of the cars looked good but just felt abit copy n paste handling wise.

As with C2 and CarEd, what is needed and available to create for TDR?

As far as I know the only way to get cars ingame is with 3dsmax 3.1 (can be found on Road Reaction, cheers Tosh it came in handy for modding Nascar Heat lol)

The one thing I loved about TDR2000 was the online multiplayer back when there was a small handful of players on Hamachi.

Im guessing map mods are still not possible or did Errol figure something out?

I wouldn't mind getting involved with this if it gets enough interest seeing.
Top

@Alex: As Timmy said, it is possible to make cars for TDR via 3dsMax3.1 and the plugins. Tutorials are available via RR2000. I never managed to properly get a car ingame myself, still thinking about it now and then. It is also possible to modify existing tracks via the text files like we used to do back then for multiplayer, or my modified Arena.
@Timmy: I think it wouldn't require much work from Errol to be able to inject stuff back into TDR (Flummery can open TDR cars and most tracks). A lot of stuff is still very different from C2 though, especially the paperwork.

The main advantage of TDR imo is definitely the multiplayer mode. The golden age of TDR multiplayer showed how solid and fun it was. Especially coupled to GameSpy Arcade (or Hamachi nowadays). Somehow I think it'd even be possible to get a master server just like Hifi tried with C2.
Graphics are a tad better than C2 as it supports more colors and much larger textures. Some aspects are a bit mleh though, IMO. The way reflections run on the car shell is very bland for example, too bad they scrapped bump mapping...
Physics, I don't know. The overal physics engine seems on par with C2? Can't say much about what's possible with the car/track setups as it was never really investigated like ChevyII, cesm, C2S, Harm and I did with C2.

Last time we talked about it all on IRC, we insisted upon the fact that the game really is too serious and has a bleak tone. A good example being the Necropolis which while one of the best levels design-wise, misses the Carma spot. As if the designers somehow forgot the game was also about running over people.
Another remark of mine is that the game textures are often too busy, creating a lot of visual noise. A good example is the drones.

I wonder what could be the start of such a mod: removing the time limit ofcourse, and maybe checking how possible it is to breath some life back into the cars by editing the bio, maybe even hack the exe to make it possible to display more stuff there? Also properly skinning one car to the carmageddon-standard?

Is this mod idea still going? Any work on it so far?
Top

Hello macacom (wow long time no see), yes I'd still like to give this a shot at some point. Just have to get into it I suppose.
Must say though that I tried playing some more TDR since then, and the task seems quite big..!
Kinda willing to try and skin TheChef with Substance Painter.

I would also still be interested in doing this, although I am extremely busy these days.
[ Razor @ Carmageddon Webmasters Alliance Network ] [ My Downloads ] [ My Carma Items ] [ Conversion lists ]
To download the BETA Mod and more information on my other work, visit me @ https://razor.cwaboard.co.uk
Top

Yep, years has passed since my last logon here. It's really nice to see Carmageddon is still kicking and screaming : )
Well, I have a shameful love for TDR2000 (not sure why), but I try to help anyway I can. Just let me know.

Bumping this topic with a little something.
This is a simple mod to the files cop_desc.txt and difficulty.txt from within CARMA.PAK. It's done by Lila Feuer aka Cyan0sis and changes the difficulty to something closer to C1 but enables fairer time rewards.

Here's the diff for difficulty.txt:

Hey, is this mod idea dead or what. im really curious to see what comes out of this mod?
Top

Idea isn't dead but I've put it aside. Though anyone can contribute ofcourse