For your daily dosage of rants, discussions and pretty much everything you may want.
Have fun, discuss the size of your girlfriends boobs, and some pics are welcome too!
21 posts • Page 1 of 1

Hi guys, a quick update here about an old news: dgVoodoo has been updated to v2.41 last month. I didn't notice. However this is a very interesting update as it adds ddraw and d3d support to an already powerful tool!

So you can run C1 in software mode with dgVoodoo's ddraw.dll too now! C2 in software mode starts but it crashed upon entering the race, maybe I just need to test again. However C2 now works well in D3D mode again!

Nice news find there tosh! I was wondering though, c2 d3d has pretty much always worked for me. Is it commonly known it doesn't for many others?
Top

Oh here it's been years since I last had it working properly!

Just a pic I did earlier to illustrate how to get D3D mode in a window: 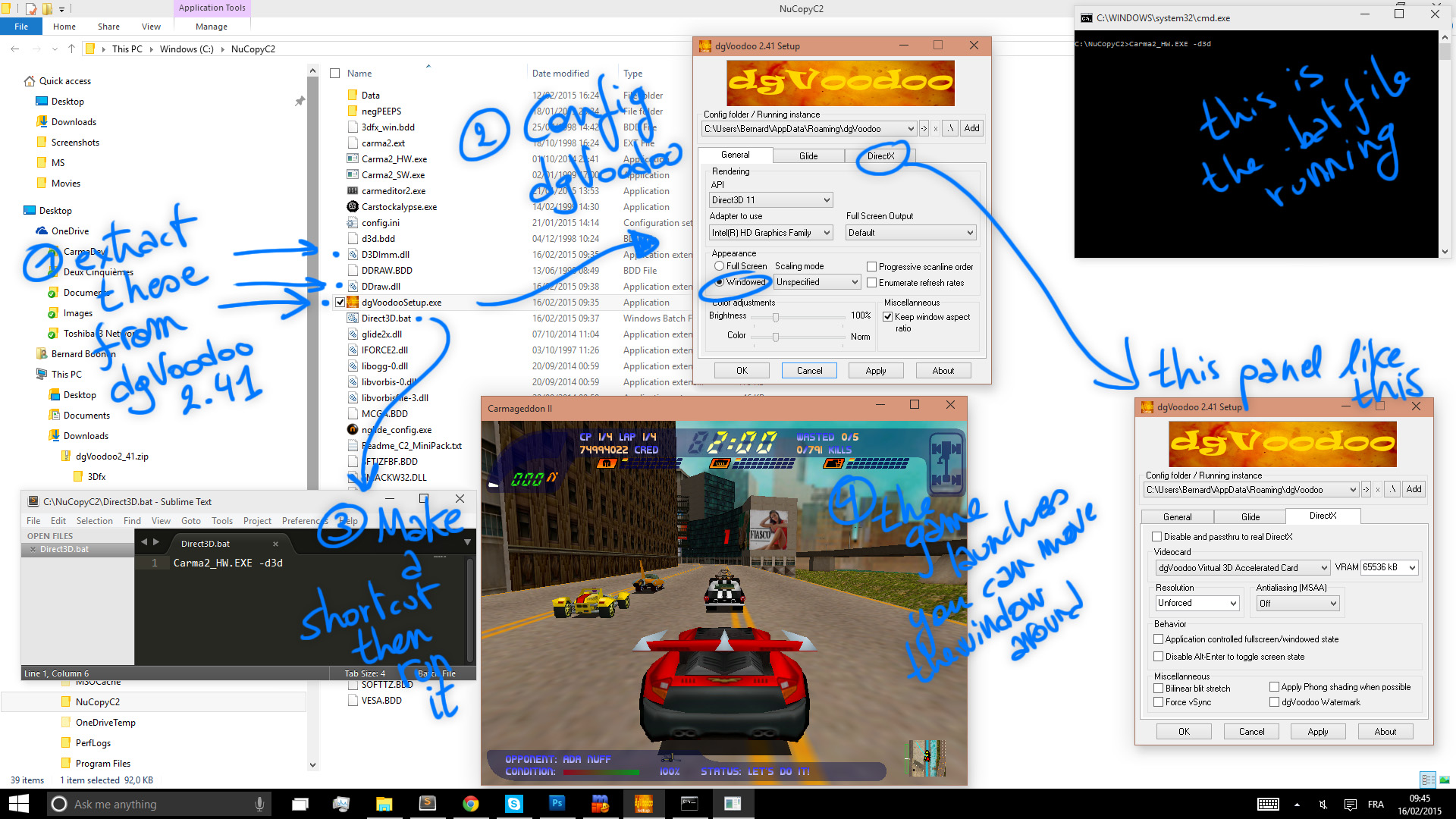 Wow the d3d windowed mode works surprisingly well. I didn't get the regular error message on shutting down the game. I wonder if it will give us proper error messages now when we add modded content that has flaws.

Anyway, thanks for the find tosh
Top

nGlide 1.0.4 changelog can be found in the first post link.

Other:
- Some problems related to the window procedures and message handling are fixed
- Names of the wrapped running DX applications were displayed incorrectly, fixed


Changelog wrote: DirectX emulation:
– Some surface/D3D device related bugs are fixed
– Mirrored blitting was broken, fixed
– 24bit software surface support is added
– support for DXT1-5 compressed textures is added but an S3TC encoder is still missing for the cases when a compressed texture is the blitting target
– Transforming normal vectors was incompatible with MS D3D, fixed. This fix includes enabling/disabling of normalizing them, default was wrong for older than DX7 interfaces
– Colorkey blend capability is added
– support is added for old mode-X display modes
– Various other small bugs fixed that I can’t remember of


- First version of D3D8 implementation is added
- Lot of bugs fixed during general DirectX code refactoring, I don't want to detail them all here
- Dynamic shader compiling for all API components for better performance (see Usage and DirectX readme for details, you'll need D3DCompiler_43.dll for this feature)

The new versions of both dgVoodoo and nGlide are awesome! C2 3Dfx with dgVoodoo v2.5 in particular runs smoothly (and very good looking) on my Win7 x64 PC, which is a marvelous achievement by Dege.

However, I still can't get the D3D mode of C2 to work. It always gives me this error:

Even after following Tosh' instructions in the previous post, it still crashes. Dunno why.

Any ideas how to fix this? Thanks.

Well it still works here! But I have to make sure that dgVoodoo uses my Intel HD graphics as adapter (in the General tab) instead of my nVidia card or else it crashes!

dege is still hard at work:

nGlide updated to version 2.0 with addition of a Vulkan API backend!

This is great! If you encounter any problem with the new video backend, don't hesitate to share it on the official forum.

Is there a dosbox compatible glide emulation that fixes the performance issues with alphas?
Top

I guess by 'alphas' you mean the voodoo patches. I think nGlide in DirectX9 mode works best with DOSBox (last time I tried I couldn't get dgVoodoo to work with DOSBox). DOSBox Daum doesn't like C1 too much apparently.

On a decent machine, with GOG's DOSBox, nGlide 2 (D3D9), latest 3DFX patch (VOODO2C.EXE -vrush), making sure DOSBox is accelerated by the graphics card, and in case your on Win10 FCU that fullscreen optimisation is disabled for DOSBox (in the properties > compatiblity tab) then... you should expect 25-35fps ingame at 1920x1080.

There's no miracle with DOSBox and the 3D-heavy games really.