For your daily dosage of rants, discussions and pretty much everything you may want.
Have fun, discuss the size of your girlfriends boobs, and some pics are welcome too!
167 posts

Hi, it's been a long time since I last posted on this forum but decided to show my ride

Edit: I tried to link it with the www address but it didn't show up.. So see the attachment.
Top

A few more Pics in the recent Snow! 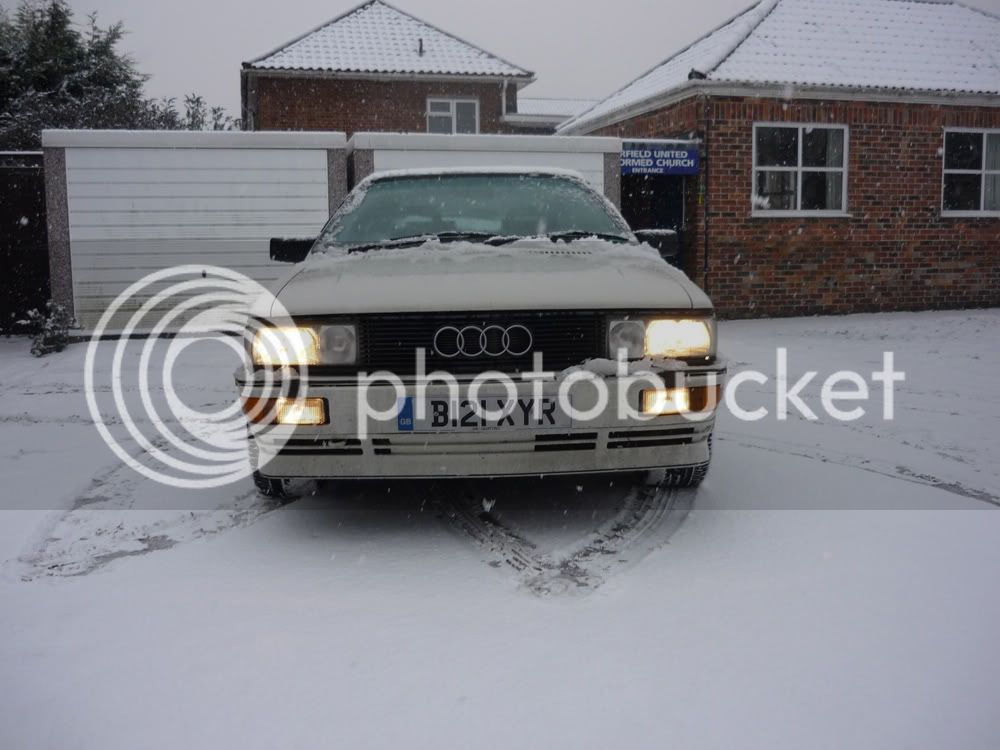 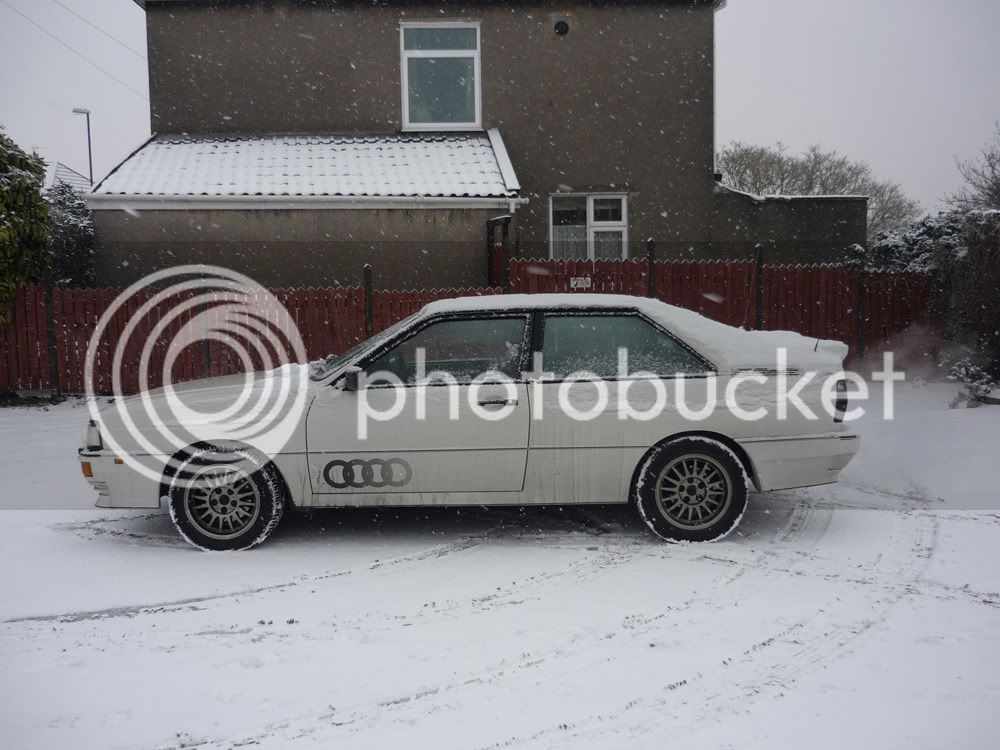 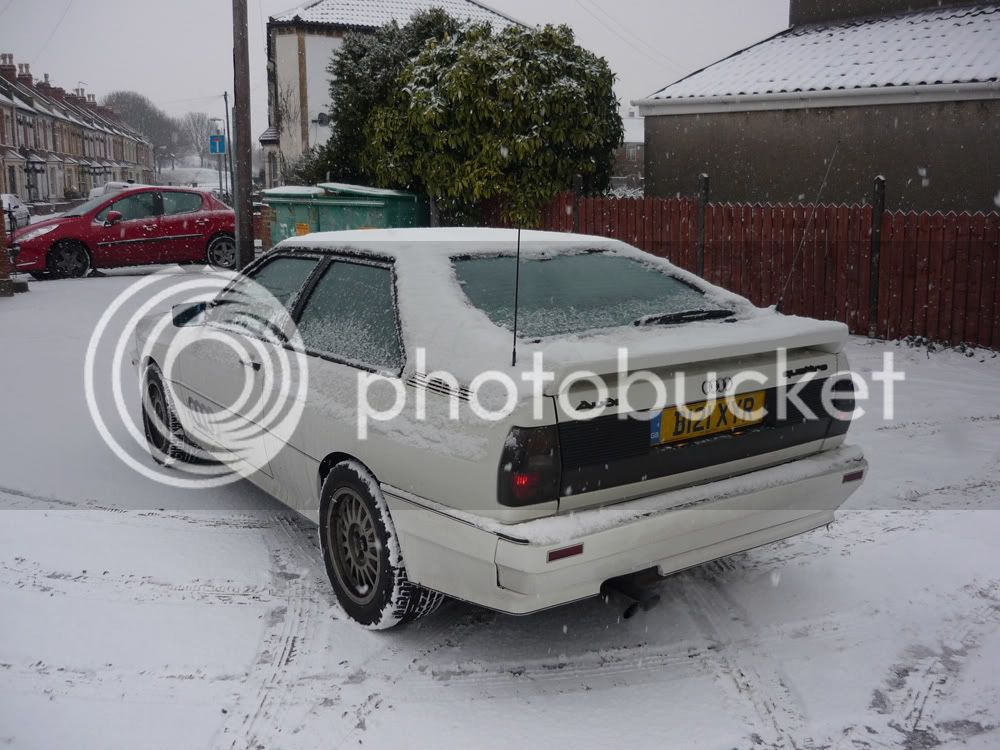 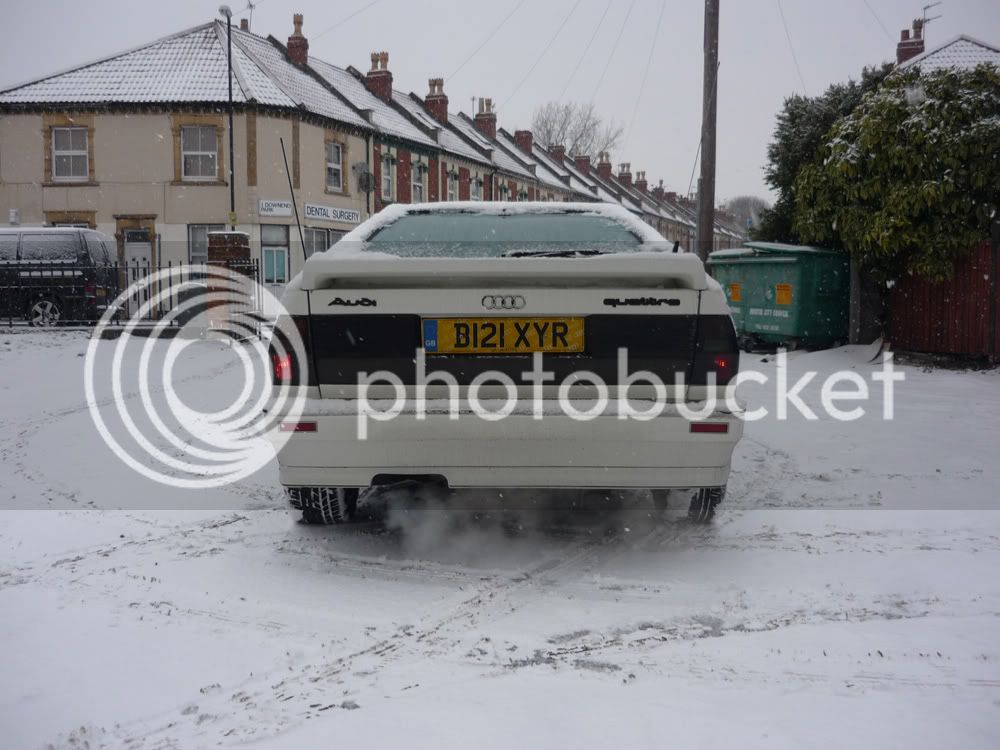 I need to take some recent pics.
Top

Here is my ride/project. My beloved `86 Subaru Leone GL. fwd/4wd on the fly 5 speed with dual range 4wd. It takes me where I need to go, is great in snow, and nets me 30mpg in fwd. I can fix anything with a 10mm wrench or a philips screw driver, plus, it's a classy `86. 138k miles, and I'm the second owner. I need to replace some suspension bits this spring, along with some cam seals, but we be steady thuggin. 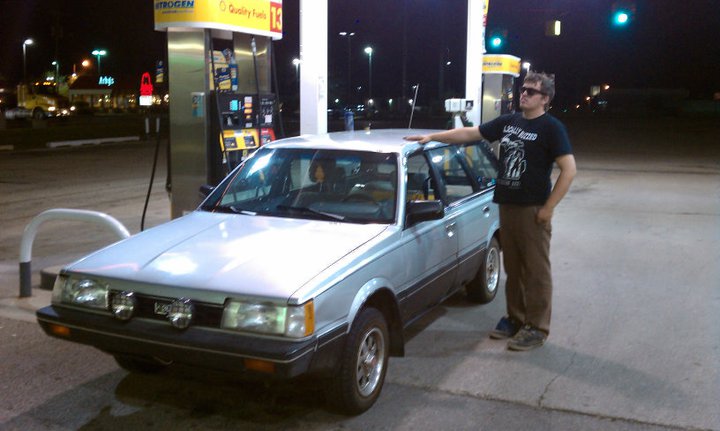 Bought this thing for $850 with 200,000km. Just needed a car to get me through spring, but it's still kicking and I like it so much I'm picking up
a 1994 Cougar XR7 4.6L tomorrow. The new one is in crazy good shape and has a fucking unbelievable 65,000 KM on it.
Oh and both cars have l-l-l-limited slip diffs for super sideways funtime!

And no I would not normally pick a Beige car, or "Desert Rose" or whatever it's called...nor would I usually go for a white car, but the new one is "Pearl White"
but in too good a shape to pass up.

Picked up, really not a fan of white but it still looks pretty good.
Got a few outdated items too, like a fucking car phone complete with on-phone and in-dash controls, and a 6CD changer in the trunk...now that nobody uses CD's. Huzzah!

Also the Phone option is kind of rare as it was stupid expensive, plus the cd changer was a '94 only option as well as the seats being a 94/some 95 option, being two tone leather and cloth with the Cougar emblem in them.

The downside is, this one is all smooth and civilized. You stomp on it, and its fast but its a smooth sports car speed up..not like the 5.0's tire's squealing and car going a little sideways launch... which I miss. Have to say though, I had forgotten how smooth a car is when it's suspension isn't beat to crap.

Thought I would bump this and add my own. 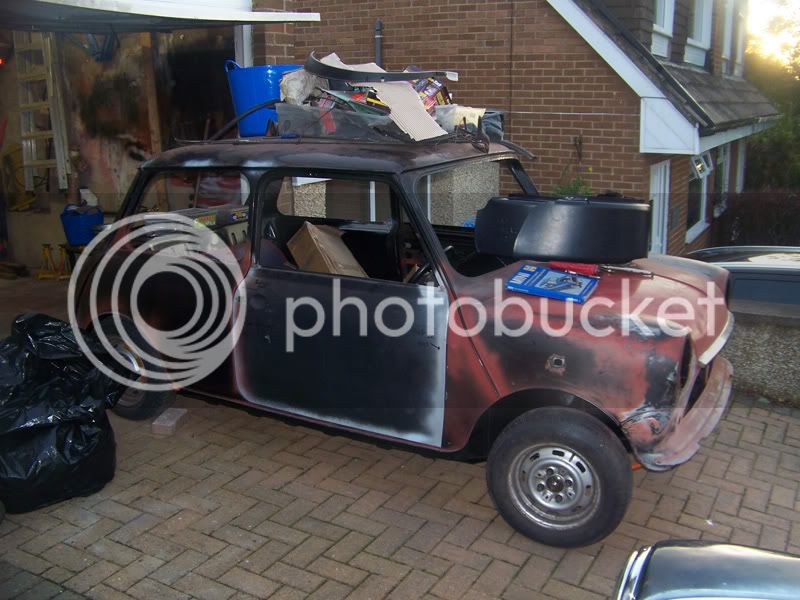 Needs painting and putting back together now I've got rid of all the rust.
Top

And I'm still driving that little firefly...
You do not have the required permissions to view the files attached to this post.

Took me long enough. Actually, it's been painted for a while, but I only just recently did the rims.
Still lots to do, though.
AlexOnNet!
Top

Good to see you're still around as well!

Ontopic: my car won't pass the annual check this time :/
Would cost me too much in comparison to the actual value of the car.
I'll have to buy a new one. Probably a Chevy Spark as I really go used to my Matiz...

Good to see you back Alex. Nice car. Are you doing a skin for your Arrow to match so you can drive in game?

Late reply to Coffeecup: I am thinking of that, but my personal computer has been down and still borrowing someone else's laptop. Has a different operating system and not wanting to mess around with it, along with not having all my tools(programs). Been busy with other projects, anyways.
AlexOnNet!
Top

Too funny too funny. That's great.
Pip, pip cheerio and all that rot!

Hey! Congrats, HB! Good ta see ya around.
***When I die may I be surrounded by scattered chrome and burning gasoline***
Top

Took me long enough. Actually, it's been painted for a while, but I only just recently did the rims.
Still lots to do, though.

That turned out beautifully! I quite liked the dull brown but this is very nice also!

You got a freaking EDSEL?
***When I die may I be surrounded by scattered chrome and burning gasoline***
Top

Yes Sir! It already looks much better, fixed some rust, cleaned it up some, new tires, got er running. If you want fun work on a messed up Tele-touch tranny!

Again, with the thanks!

What's your plan, Alan?
Also, I had to look up that Teletouch...

Thanks guys! Now I have one of the best cars ever made (Beetle) and one of the worst! (guess)! Plans are getting it running and stopping under it's own power. It's actually a very solid car for it's age! The old V8 runs well for it's age and the tranny itself isn't really the problem, it's the shift system. Why have a lever on the column or floor like a peasant when you can push little light up buttons that may or may not effortlessly put you possibly into the gear you want! I have reason to believe this system was designed by satan himself! Currently the steering column is taken apart in the TV room for examination

Also for no apparent reason the headlights don't work, the radio makes a fun buzzing sound, things like that. Excuse my rambling.

(Oh since this pic the dash has been restored to like new niceness, not necessarily like new functionality, though

They buzz normally (more like a hum when new), but they make a helluva racket when they wear out-the spark gap bleeding over the speaker as well. When those radios work-There's no warmer sound than a tube amp. ;)

Methinks I remember hearing about a solid state DC chopper that replaces those ol' buzzers... Dunno where I saw them though. Mebbe JC Whitney?
***When I die may I be surrounded by scattered chrome and burning gasoline***
Top

Yeah I believe you're right! My 56 Bug has a 6V tube radio, it sounds awesome. But this radio is garbage, can't change stations, the volume knob's busted, most of the pushbuttons are jammed.. It's a quality item.
Top

Sounds like it's time to find an updated solid-state retro-looking radio. They make 'em
Just one place that makes modern radios for oldies:
http://www.retrosoundusa.com/?gclid=CMa ... nQodzEAATg

http://www.antiqueautomobileradio.com/
***When I die may I be surrounded by scattered chrome and burning gasoline***
Top

Since last fall I've had 4 cars.

My beloved Cougar took out a Taurus wagon that made an improper turn in front of it.

Sustained very light damage, drove it for two weeks while waiting for insurance to pull their finger out. Given the age of the vehicle and the Pearl paint they wrote her off with only 86,000km on her. I was rather pissed at them until they offered me $3000 for it which is triple what I paid for it. Plus not being at fault in the accident was an added bonus.

Needing something quickly, and enjoying the Ford MN12 handling so much, grabbed a $600 95 Thunderbird...which given its brown on brown scheme became known as the Thunderturd pretty quickly.

Also picked up a little something for fun to the tune of $1000
It's got pretty high mileage but it still burns rubber off the line, and talk about a burnout machine. 1996 Buick Roadmaster LT1 with tow package.

And finally my new daily driver, something I've wanted for ages. I still want a 1983-1985 Police Crown Victoria someday, but this 2009 will have to do for now.

Completely encased in ice. It is Canada after all.

Ending up with the Crown Vic must've felt good. I think you ought to hang on to that.
MacCarpocalypse | coffey.polygonized.com | CoffeyCup's Gallery
Top

What to do with all those retired rides?

Well, obviously. All three actually still run. I mean we had to rig the transmission lines in the thunderbird and the cougar's rad is now one with the fan, but hey.

Hell yeah, Land Pirates!
I would have loved to be in the place of your friend when you surprised him with the ramp jump

You guys should work at Stainless in the Physics R&D dept.

And btw, I drive a Chevy Spark LTZ now. And it's TTR's VW Golf Mk3 behind it

nicely done jabman, been a long time indeed.
nice to know the 'lac is still up and running i figured the old girl would be done by now.
i had a friend with a 99 crown vic police interceptor. still had the spot. we could get about 20mpg at 100mph, and were doing about 90 on 270, got passed by a cop who looked over at us, both in dark blue work shirts and sun glasses, waved, passed up and took the next exit. that was an awesome car. 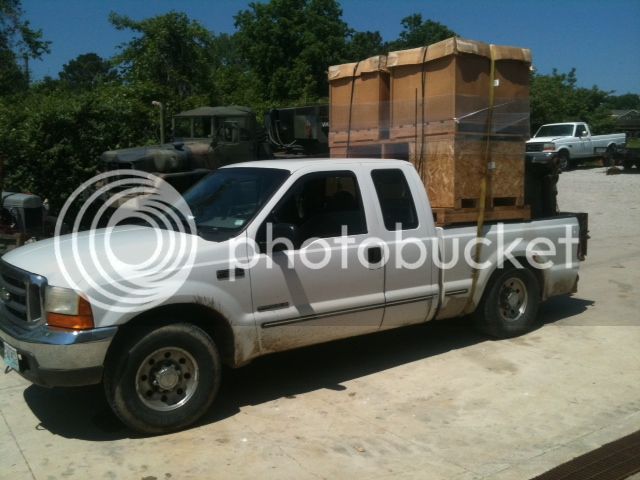 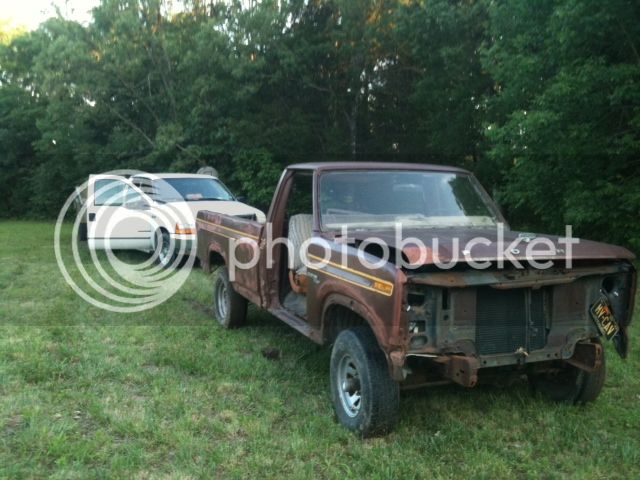 85 d-150 4x2 318-8 727auto got it running driving and stopping for $500 and the damned dodge has less rust than my 99. just needed muffler, wipers and steering centerlink and i can get plates on it. i'm thinking of going from poop brown and tan to flat black and florescent green. 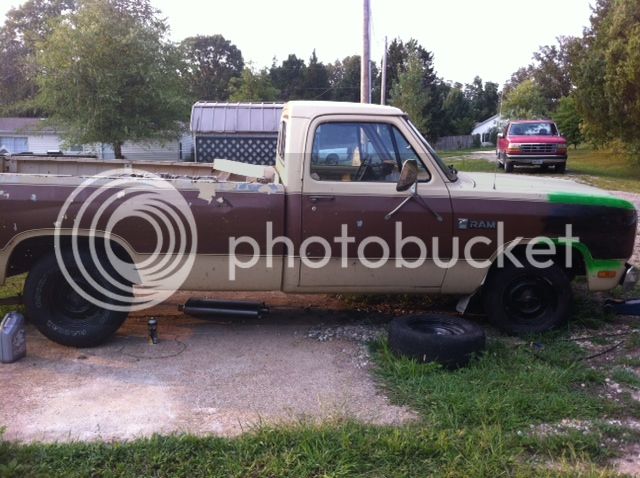 Greetings! Bringing back this great topic to see what everyone is driving these days? Here I discovered the Edsel was in fact a very bad car. All were either built on a friday or monday by alcoholics, apparently. I got sick of repairing/replacing everything and replaced it with this conveyance:

This is a 1958 Lloyd Alexander LS600. It is a whopping 10 feet long! Engine is a 2cyl 4 stroke, 4 speed standard on the column. That's the original paint! I don't know why I get these things either..