When the mayhem started! Discussion, mods and troubleshooting.
10 posts • Page 1 of 1

So the thing that got me looking deeper into Carmageddon modding in the first place is the fact that I stream and that, like many streamers, I've accrued a cast of recurring characters and in-jokes that by and large wouldn't make much sense to an outsider. I figured, hey, why not put some of our cast and crew into Carmageddon since I've decided to stream it? Still, despite my fears that nobody will get it, some folks on the Carmageddon Discord have pushed for me to release these cars regardless of context, so I guess this is where I'm gonna dump them.

Note two things about these:

1.) The earlier ones are flat out just other people's cars which I've assigned new drivers to, which means that by and large they're going to replace existing data for the originals if you have them installed. In these cases, I'll be sure to indicate which car it's going to replace.
2.) Some of the later ones (and a few not by Toshiba-3) are somewhat incomplete as I've been learning how to do this stuff. Several don't have grid icons, damage masks or cockpit views. I'll probably get to doing this stuff for those eventually and update them as it happens.

Anyhow, it's time for our first racer: Garbagefield!

Garbagefield was originally created by Joel "Vargskelethor" Jarvisson of Vinesauce fame during a Mario Artist Studio stream in which he decided to draw Garfield from memory and things... didn't go to plan. I thought this was so funny that I sort of latched onto the character and have since created a full ROM hack of "A Week of Garfield" for him starring the crappiest cat as well as featuring a cameo of him in my entry for his 2018 Doom Mapping Contest, and has since appeared on numerous streams in another game I've been working on.

He's a neurotic trainwreck, constantly ricocheting between smug overconfidence and a complete nervous breakdown, and he's not particularly good at anything. Being trash, it's fitting then that he drives an edit of Toshiba-3's Renault 5 Trash called the Pasta Wagon, a little orange piece of garbage that looks awful even at full repair. Enjoy smashing into him! Challenge yourself to wreck other racers in this little crap car! Whatever! 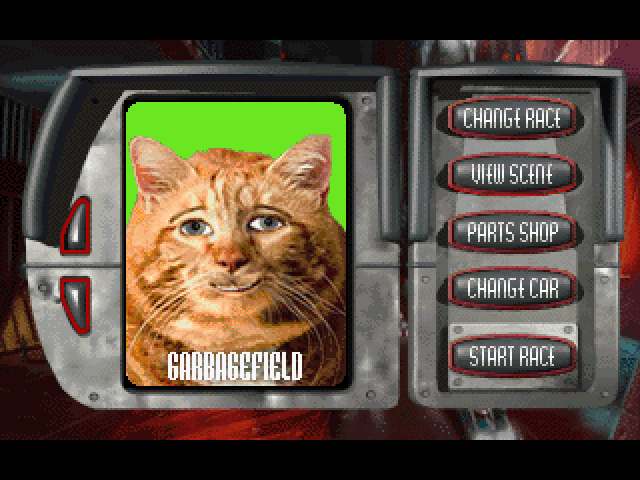 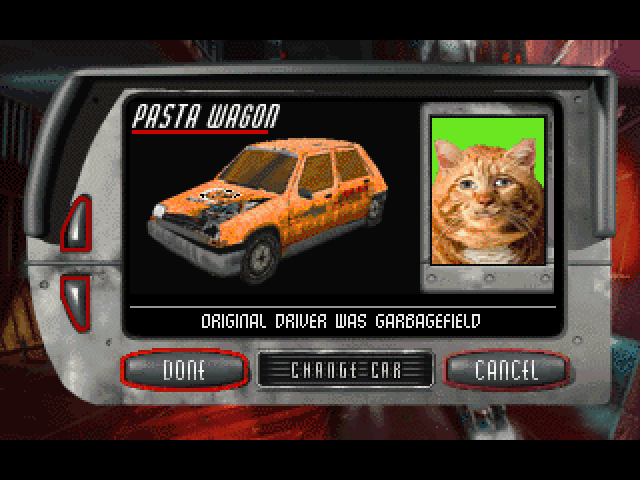 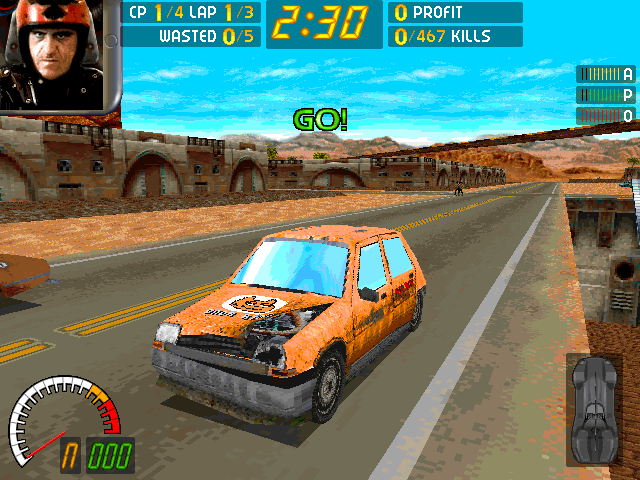 Next up we have SKOUT!

SKOUT is an obscure Polish-made FPS for Windows that was never released outside of that region of Europe. The titular character, SKOUT, is... well, we're never actually told what the hell he is. Were I to guess, I'd say he's some kind of green Robocop. Anyhow, SKOUT works for a race of intelligent talking tentacle slugs called the Skolacyds (I cannot find an official spelling for this ATM but I'm gonna assume this is correct) and his job is to go destroy the evil alien Kybernoids, who have built a weapon that can destroy his bosses and that's bad news for them. All in all, the game's sort of just a less competent and original Unreal-type experience running on an in-house engine featuring numerous odd bugs.

That is until a guy I follow on Twitter discovered the game, despite never being released anywhere but Poland and Germany, had English audio hidden in the files and, unbelievably, he figured out how to enable it. The thing is, uh... I don't think the actors actually SPOKE English?? And as such the resulting audio is, frankly, nothing short of amazing. Between the bizarre engine quirks and the goofy, flat, tone-deaf voice acting, I instantly fell in love and SKOUT quickly became a fan favorite. Here in Carmageddon, he drives the Reventon Drohne, a green take on Toshiba-3's Reventon from RR2000. 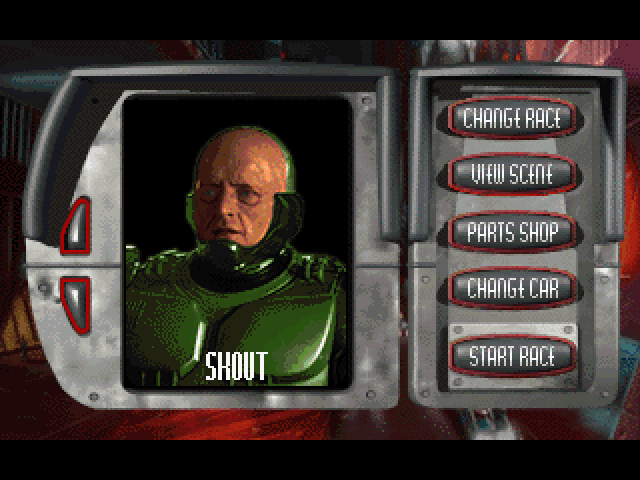 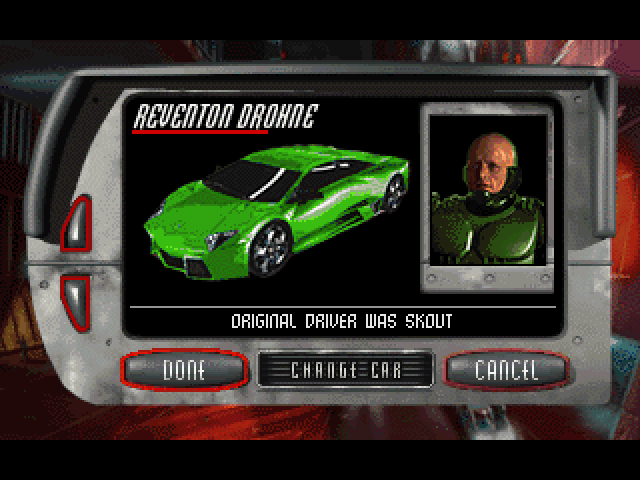 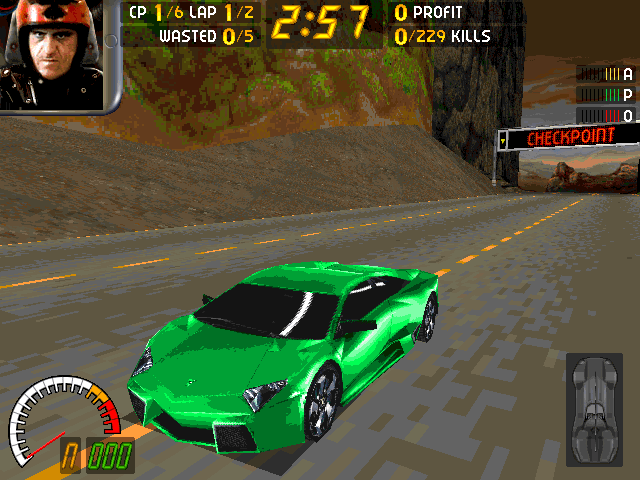 Next we have Mickey Jefferson!

Mickey Jefferson was one of the first custom soldiers designed during my XCOM 2: War of the Chosen campaign, largely designed by one of my moderators. Despite being intentionally designed to be as stupid looking as possible, using a robot's torso model, goofy purple hair and tiny little short shorts, he's one of the most fleshed out characters from the stream. He's a big, goofy mama's boy who wears a suit of powered armor built by his mechanically gifted mother, who also works for the XCOM initiative. Despite his being a sort of dumb man child, however, Mickey has a special gift. He's kind of an idiot savant, like Rain Man, except instead of being unbelievably good with numbers, he's a peerless alien killing machine. Good natured and kind on the surface, he's slain countless aliens including all three of the Chosen as well as almost all of the alien warlords.

Sticking with his lovable mama's boy angle, Mickey drives his mom's van in Carmageddon, which is a very slight edit of AdR and Deep_Blue's old 1989 Voyager Minivan. We've decided it's canon that Mickey is an unwitting opponent in this death race, having only just taken a drive to go get him and his best friend Crazy Theo some ice cream, and that it's also absolutely not the first time this exact thing has happened to him on that exact same trip. 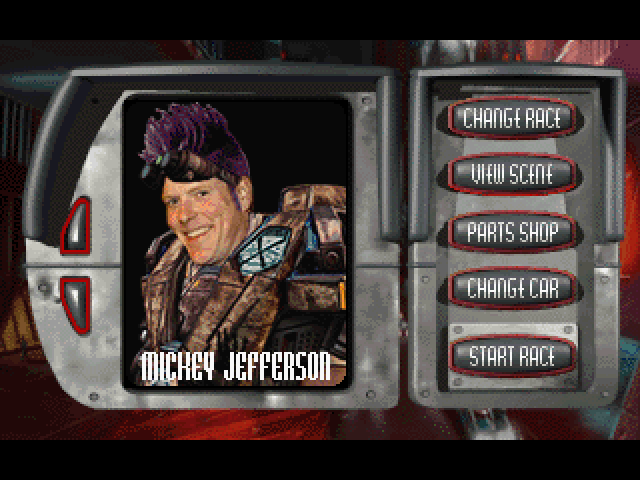 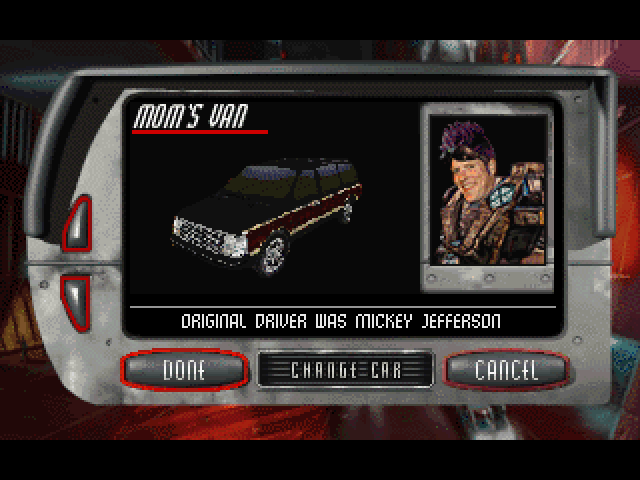 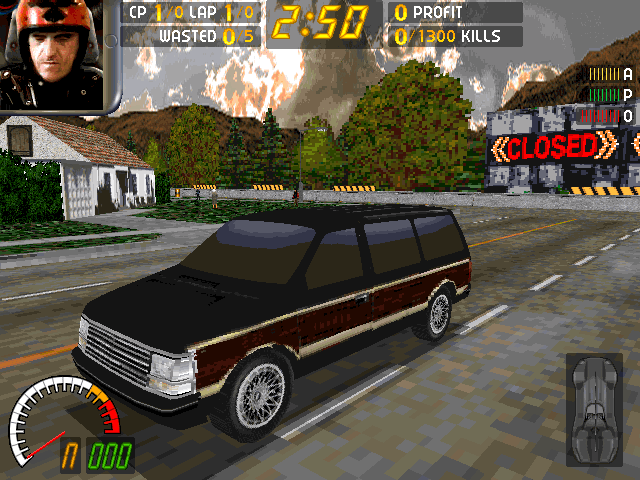 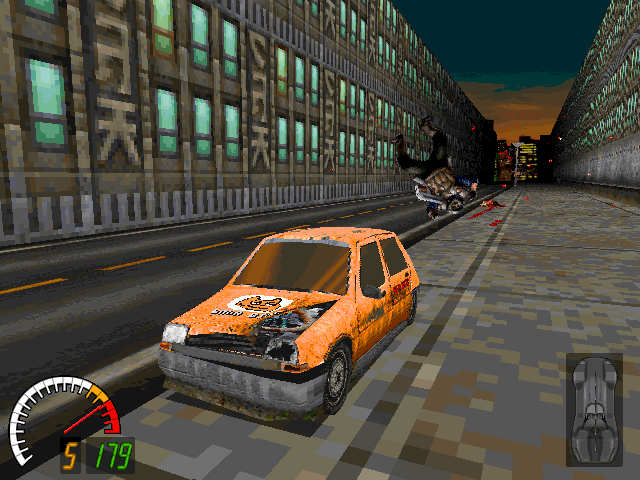 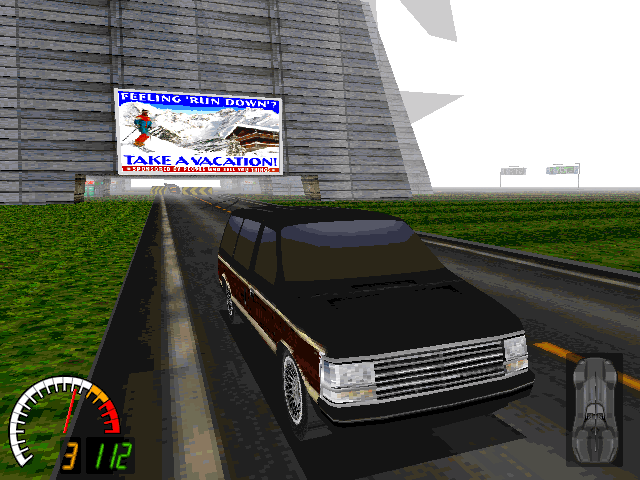 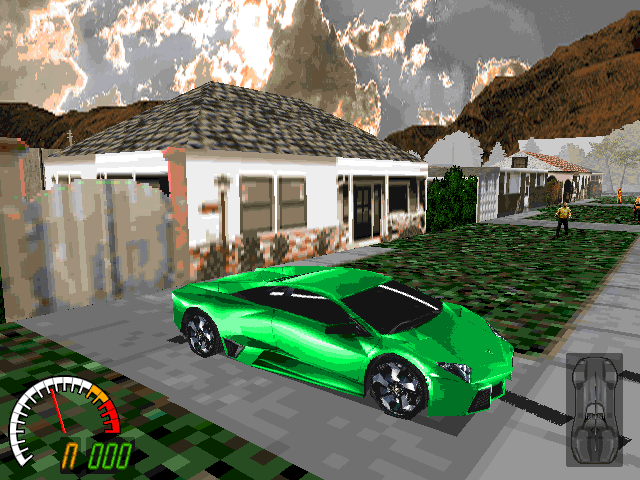 Hey, I like that van.
Is it still front wheel drive?
***When I die may I be surrounded by scattered chrome and burning gasoline***
Top

Oh hey, the guy who made the original! Hope you don't mind too terribly that I edited it a bit for funsies!

As for being front wheel drive, it should be? It was one of my earliest attempts so I didn't mess with any mechanics on it.

About to do just that! Stay tuned to this space!!
Top

Continuing with some more of these, have some ALF! 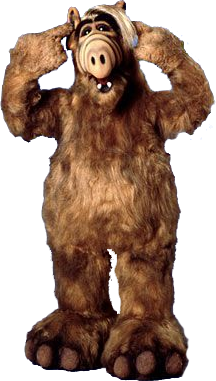 Gordon Shumway (AKA ALF) is a character who, unlike the others, likely needs no introduction. Just in case you're too young or live in a country that's never heard of him, though, this popular character was the titular character in a late 80s sitcom where he, an alien who crashed on Earth fleeing the destruction of his home planet Melmac, ends up living with the mild mannered Tanner family, who must constantly try and balance dealing with his odd alien customs and trying to keep his very existence a secret from the world. He was SUPER popular for a time, earning a cartoon spin-off, a licensed Marvel comic book, and appearing on every kind of merchandise imaginable for years even after the show's cancellation.

As for his meme backstory, it's pretty weird and confusing but here goes anyhow: ALF is sort of the unofficial mascot of my streams, appearing in basically every pre-stream background image and often even in a parody of the game's title. These days this probably doesn't make as much sense, but the reason was that my streams started with various module/chiptune remixes of the ALF theme from the earliest ones all the way until October of that year, which was in turn a reference to a goofy thing I'd been doing with my online friends before I started streaming. A group of us had gotten into playing the original Phantasy Star Online for a while, and whenever I'd join the Discord voice chat before we got started, I'd announce my presence by blaring an ALF remix for... no real reason. I'm weird, I guess? At any rate, ALF still appears in every stream and a clip of a theme remix still plays whenever somebody subscribes to the stream.

His car, the Melmac Cruiser, is a repaint of Toshiba_3's UFO Wagon port from GTA V, made to look as much like the family's station wagon as seen in at least one episode of the show as I could. (The one in the show was a bit more of a greenish brown color, but the palette crunched it down to a more brown color.) The idea is that it's literally the family car with ALF's spaceship strapped to the roof. Ha! 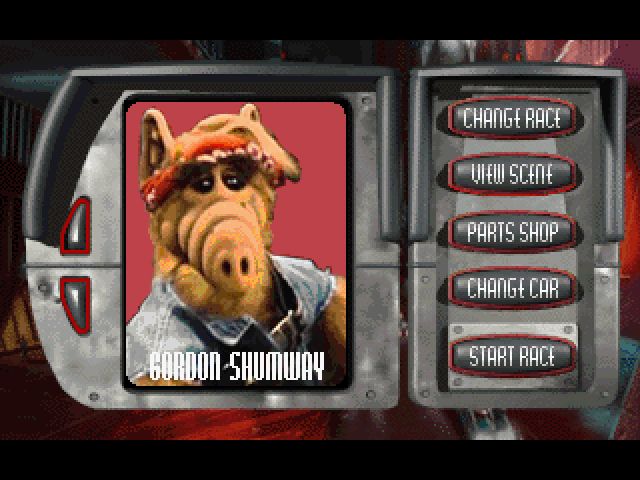 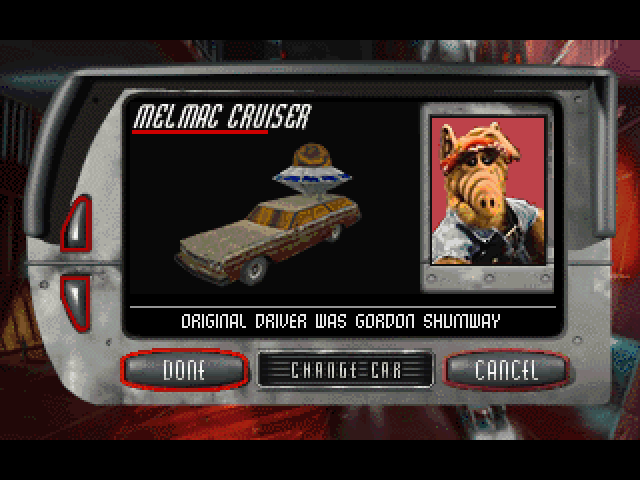 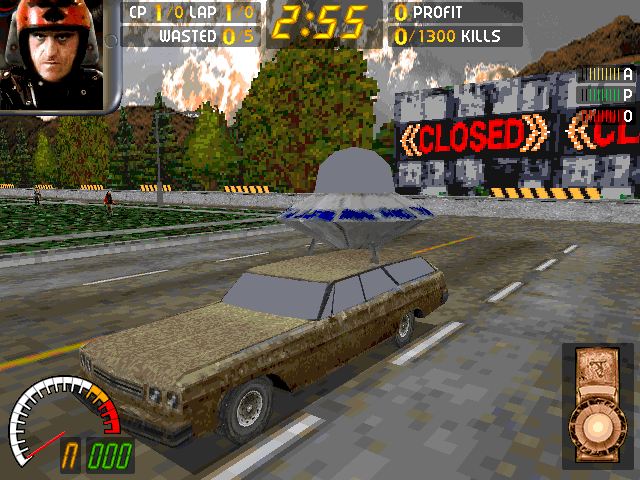 Next we have Donald Q. Peasley!

Donald Q. Peasley is the star of my Kenshi streams, and probably the one character with the most impressive story arc. Perhaps best described as "a giant, gangly puppet of William H. Macy brought to life by a witch's curse," Donald started his quest with nothing but a pair of tattered pants and a rusty sword. Initially weak as he was foolish, his very first foray out of town ended with him mistaking a group of slavers' dogs for wild animals attacking innocent people, which in turn resulted in him being beaten to unconsciousness and enslaved. Fortunately for him, his captors seemed to have second thoughts about trying to put this scrawny wimp with Kingdom Hearts feet to work and kinda just wandered off without him, allowing him to pick his shackles and free himself.

Over time, he was able to amass a small army of followers known as "Pealsey's Posse," ranging from the hunched, primal swordsman Rowdy Vulture to the roughly human Lumpo Butternut, and through many bitter defeats grew to become a battle scarred beast of a man. Now clad in a full set of masterfully crafted samurai armor and wielding a huge katana, Donald is a powerful warlord who rules the kingdom of Peasleyshire from his throne within the massive Peasleydome. There are few who know so many of the old world's scientific secrets as he, and those who would stand against him on the battlefield soon discover the folly of their actions. Soon he will move to enact his cunning plan to kidnap the Holy Emperor and overthrow his backwards, terrible Holy Nation. 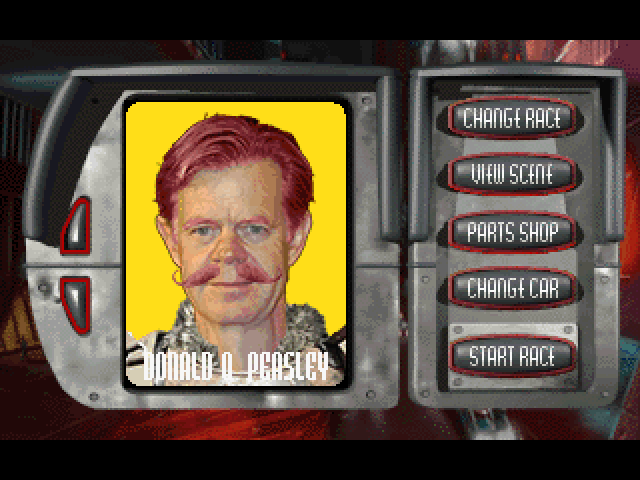 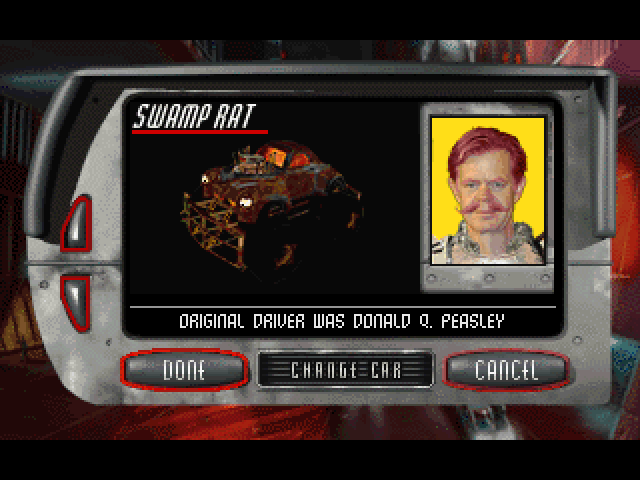 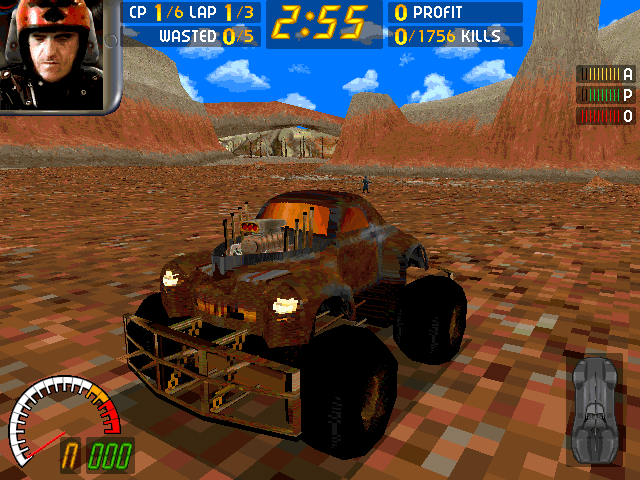 Mmh..? Wheel model identifiers don't seem to match what the ACT file is looking for..! When the game can't find a model it duplicates the main component. 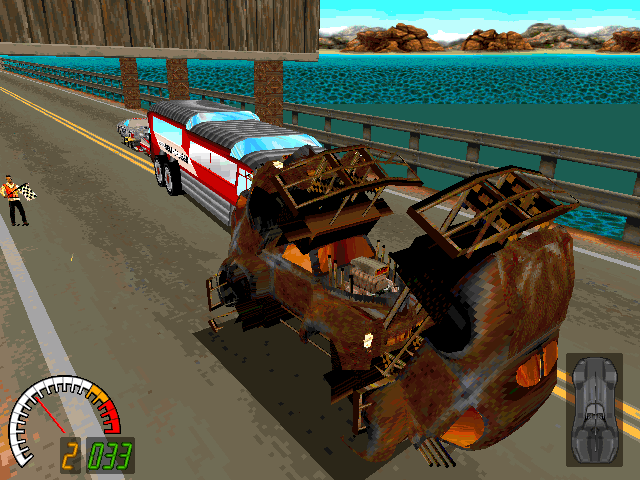 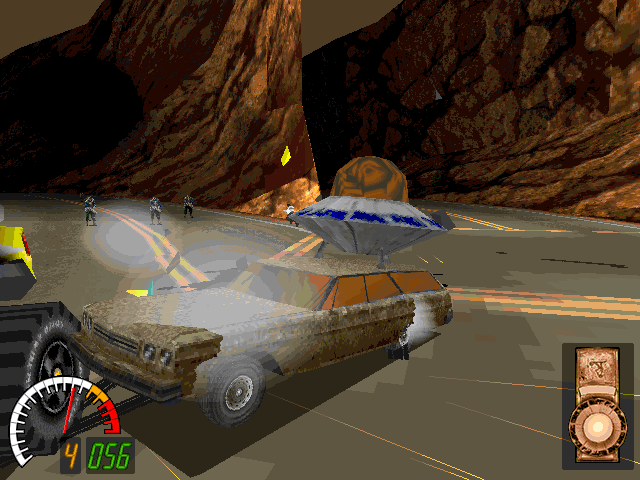 Aye, Tosh.
I actually like it better that way!

It eventually died a horrible, fiery death during a nor'easter when the left front power window harness shorted out. Shame, it was, too... I had just put a new timing kit into the big Mitsubishi 2.5
***When I die may I be surrounded by scattered chrome and burning gasoline***
Top
10 posts • Page 1 of 1